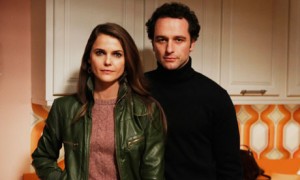 Not nearly enough time to devote to this outstanding show, but I wanted to make sure to post some praise while it was still fresh in my mind.

I recently binge watched the first season and absolutely loved it.  The level of tactical expertise and strategic talent required to elicit a convincing portrayal of Soviet deep cover agents out of American actors is almost incomprehensible.  Add to that the creative manipulation necessary to force an American audience to relate and feel sympathy for people who represent our Cold War enemies and we have the makings of a potential all-time great show.  Until recently, the primary premise for the show would never have even been considered, but the rise in appreciation for artistically driven TV drama has allowed creative freedoms to grow where they otherwise would have been squashed at conception.

Specifically from the first two episodes from this season, I’ve enjoyed the further development of the secondary characters.  The depth that’s been added to the Soviet Rezident, along with the introduction of his new underling has further enhanced the nuance of each episode.  Obviously one of the great advantages to spy drama done well is that the characters should have natural layers to them from the outset of the series, so any additional breadth that is added will have an exponentially positive effect.  And while we’re only in the beginning of season 2, we’ve already had Nina, a relatively major character, turned from Soviet agent to American asset back to Soviet counter-intelligence.  For most TV characters, that’d be enough to make up an entire seven season run, and all of that happened in a 13 episode stretch!

Since every major character is now theoretically and realistically in play to be turned with potentially catastrophic effects for the rest of the cast, the series is set up to be perpetually explosive.  Another significant advantage that the show has in its back pocket is that we know there is the firm endgames of mid-80s perestroika and glasnost that will spell the end of KGB presence in the US.  Or does it?  Can’t wait to see.  And finally, having Keri Russell play a lead role is doubly effective, since we’ve never seen her in anything remotely close to this.  Hell, there’s never been anything remotely close to this, I’m rooting for the goddamn godless pinko Soviets, what the fuck, I love it!