This is late as hell, but having a toddler that requires constant attention and a job that drains a lot of hours makes it difficult to submit these in a timely fashion.  Hopefully this gives everybody time to have DVR’d this shit. 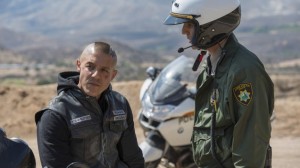 The Juice is loose!

Seriously, it may have been one of the smaller things happening, but an awesome through-line of this episode was Juice acting like a crazy ass, has nothing to lose, manly motherfucker.  When some crooked cops pull over the MC on it’s way to a SAMCRO mega meeting, Juice gets confrontational and when shit goes down, steals a cop bike.  Later in the episode when he finds his stripped bike in a chop shop, he goes nuts on the shop owner.  Last season I’d come to the conclusion that Juice was one of the only ones I’d really liked, but he’d become relegated to a subservient role.  There was a whole storyline where he went through insane hoops for sheriff Eli to ensure the club didn’t discover his black heritage.  That ended with a fizzle as the Sons kind of just collectively shrugged their shoulders.   But since then he’s been Clay’s bitch boy, Jax’s bitch boy, and Chib’s punching bag.  So, for me, it was nice to see Juice going HAM.

Speaking of Eli, Sheriff Roosevelt is now investigating Toric thanks to a tip off by Gemma.  He may not be on the Son’s payroll, but he sure becomes righteous at good times for the club.  He discovers Toric’s drug kit and two bullet holes in the hotel room floor.  DA Patterson, played by CCH Pounder, does not want to cut Nero loose just yet however.  She’s grasping for all the leverage against Samcro that she can get, which includes pressuring Tara to link SAMCRO to the school shooting weapon.  Tara, for all the sneaky shit she is doing, doesn’t want to go that far.  This Tara divorce, moving the kids situation better pay off hard, because it’s not moving forward but we still need ten minutes reminder that it’s happening every episode.

Gemma went nuts at the police station to see Nero, and I highly enjoyed watching Nero hang his head in resignation at seeing Gemma start a fight with cops.  I really thing Nero might be my favorite character on Sons of Anarchy right now, and he’s not even a Son.  So it’s nice to see people so firmly in his corner.  At Nero’s whore house Gemma runs into Venus Van Dam, played by the always great Walton Goggins.  Last time we saw Venus, she was played up for laughs primarily and that is what I thought we were going to get this time.  Instead it turned into a sweet moment, fleshing out Nero’s character and affirming his status as a good dude.  Walton Goggins is so fantastic that he can turn this ridiculous character into somebody sympathetic.

Jax takes the charter on a road trip for a meeting of all Sons charters.  Jax needs to address the entire club regarding the gun business, and address them he does.  He gives a pretty fantastic speech that laid out a few things: Jax isn’t his father.  He’s not questioning his lifestyle, and won’t be weakened by doubt.  He isn’t Clay, trying to make the easy buck at the expense of lives.  And he is not looking to blame anyone.  Jax just wants to set the Sons on a more legitimate path less thick with peril.  As he finishes his speech the entire club starts pounding the table as a sign of agreement.  It’s like a motorcycle slow clap.  Bobby’s back, as we discover that he wasn’t starting a new Nomad group but recruiting for the MC.  Overall this was another solid entry for SOA.  I’m enjoying the new hour and a half length this season as it allows events to unfold instead of setting up shit and having to wait for it to pay off at the beginning of next week’s episode.  Four stars out of five.