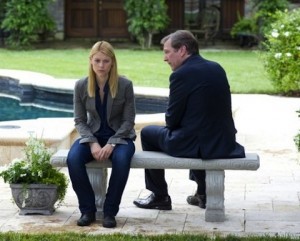 Is there any way to kindly and gently say, “worst episode of the series so far”?

The first two episodes of this season were spiraling downward to this.  Then, with the third installment, we had a reprieve, with Brody returning to reach his own personal rock bottom, which was mirrored by Carrie’s.  There was an enticing plotline, interesting new characters, fantastic visual storytelling, and a completely uncertain future for Brody.  Sure, Carrie was STILL in the fucking institution.  But we saw multiple rays of hope that the creators at least had some type of vision for the remainder of the season and the series.

And then it all came crashing down in episode four.  I seriously don’t know how much more of this crap I can take.  The runaway teen garbage with Dana and the concerned parent bullshit with Jessica serves no discernible purpose, is completely overacted, and has cheap throwaway dialogue that would be better suited on The Secret Life of the American Teenager.  AND THEY BROUGHT BACK MIKE?!?!?  WHAT THE FUCK, HOMELAND?!?!?  I THOUGHT WE WERE AT LEAST DONE WITH FUCKING MIKE!!!!  Am I really supposed to believe that Mike is going to stick around after it’s been exposed that he was having an affair with a social pariah that is married to public terrorist #1?  Was the pussy that good, Mike?

Set aside for a moment that the plot, acting, and dialogue are awful.  The showrunners have already asked me to believe that bi-polar and off her meds Carrie, who was sexually involved with the Nick Brody that is being personally blamed for blowing up CIA headquarters and killing 200+ people, has not been taken into government custody.  She testified before the committee investigating the incident, and then her boss basically implicated her and said that she was lying, but whatever.  Now, I’m also supposed to believe that a 16 year old kid vaguely suspected in killing his brother as part of a suicide pact can just walk right out of a mental institution, hop in a car with his girlfriend and drive off in a stolen car, and no one can find them for days?  Enough of this shit.  For the good of the show, kill off Brody’s family.  Just take off and nuke the entire site from orbit.  It’s the only way to be sure.

The leftovers here are pretty boring.  The spy stuff with Saul and Fara should be exciting, but it’s almost intentionally dry.  I don’t understand the lack of emotion, whether it be acted or written that way.  That storyline has it’s problems, but if it was the main focus of this episode, it would still be a drastic improvement.  Also, Carrie, out on parole from her stay at the nuthouse, goes to the house of random dude that she fucked, fucks him again, and steals all of his cash.  It’s just a completely needless scene.  Why not have her meet with Quinn at a safehouse or something?  Instead, no Pete Quinn?  So Quinn had multiple arcs going.  He was going to quit the CIA if they didn’t stick up for Carrie.  He killed a kid, and felt bad about it.  He confronted Mr. Bad Banker that is funding terrorists, and threatened to kill him.  And then he disappears for an episode?  Giant fucking red flag that the writers and producers have no clue what they’re doing.

The cliffhanger is that Saul and Carrie planned her institutionalization all along as a way to get her recruited into the Magician’s clandestine activities.  This seems like a giant stretch, since Saul/Carrie had no way of knowing if the terrorists would even reach out to her, or that they even knew who she was.  Yes, all of the shit between Saul and Carrie was publicized, but I don’t buy it.  And then, they aren’t at all suspicious of Carrie?  Yes, she’s a down and out CIA operative, but she’s still a CIA operative!  I see where this is going, and I’m not exactly intrigued.

Short conclusion here.  I’m sure there are people out there who have seen the Emmys and the glowing reviews and are thinking, “shit, I’ve got to binge watch Homeland so I can get caught up before the end of Season 3!”  Based on what we’ve seen so far in season 3, I’d say don’t bother.  Watch Season 1, then watch Season 2.  And then just pretend that that’s the end.  You’ll only be disappointed with everything that follows.