As an unapologetic supporter of the Walking Dead comic series, I constantly find myself desperately WANTING to like this show.  Even during the fallow period of Season 2, which is pretty much 100% undefendably horrible, I still had an intense desire for the show to be great in order to prove to people that it was worthy of being considered “more than just some stupid zombie show”.

I feel like now, I can step away from that undying allegiance a little, for two reasons.  First, the show is a ratings juggernaut.  No one can doubt that the show has achieved phenomenal popularity beyond any fanboy’s wildest expectations.  There’s always a sense of masturbatory validation when something that you’re plugged into from the jump explodes into the mainstream public consciousness.  It’s not seemly, but it’s there, and yes, it feels good that other people like something that I like!

Second, the public’s acceptance of comic books as source material for other forms of media has exploded, even since the first season of TWD aired.  For some reason, even though geek culture has exploded into movies, TV, books, and all other forms of media, the actual original source for the content is still shunned as “too nerdy”.  Movies based on comic book characters gross in the billions and TV shows based on comic books pull huge ratings, but discuss the comics themselves and be immediately ostracized as an OMG NERD.  It’s unfortunate, but the media being created from the source has shifted into the primary consumable blockbuster material, and that’s a major paradigm shift from even ten years ago.

So having removed my unyielding need to defend the show, I can be freed up to actually examine if it’s really good.  Super-ultra specific analogy: I’m a Steelers fan.  Our QB used to be Kordell Stewart.  He was my QB, so I had to defend him, no matter how terrible he was.  But then he wasn’t my QB anymore, he was the Bears QB.  And then, he was fucking terrible, terrible, terrible.

So what can really be said about The Walking Dead, halfway into the first half of the fourth season?  It’s been worse, but it always seems like it could be significantly better.  The biggest concern coming into the season was that the entire cast would be eternally bogged down in the prison, just like they were stuck by the invisible barrier that surrounded Herschel’s farm that kept everyone stagnant during season 2.  That’s been navigated nicely by sending various characters on road trips, while leaving Tom Green behind at the prison to play with snakes and have threesomes.

Other positives abound.  Introducing a quick-killing sickness, and tying it nicely with the zombies amps up the danger inside the prison, and uses the claustrophobia factor to double the fear quotient.  Having a mystery run its course through the first handful of episodes was also extremely effective, and I don’t believe that it has been solved, either.  It also never hurts to add two Wire alumni to the cast.  In my head, I keep thinking that the characters are named Cutty and D’Angelo, and really, why can’t they be named Cutty and D’Angelo? 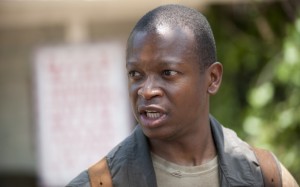 Not everything is perfect.  The dialogue still sometimes feels like it was written by a 5th grader, while still being as heavy handed and cumbersome as humanly possible.  People don’t talk like that.  Maybe in the zombie apocalypse people talk like that.  But I don’t think this virus, or parasite, or whatever it is causes everyone to start talking like William Shatner.  Also, the show has always gotten away with presenting itself as possessing a “no one is safe” element.  They killed Lori, they killed Andrea, they killed T-Dawg.  But as the ratings grow, is AMC really going to risk killing Rick, Carl, Glenn or (gasp) Daryl?  Game of Thrones benefited from its source material in that George RR Martin killed off his main protagonist in the first novel.  But Robert Kirkman isn’t going to off Rick any time soon, and there’s no way AMC is killing off their version.  In a show based on fear, the audience’s main fear has to be that the hero might actually die.  The fact that Rick Grimes will never die strips out a significant amount of potential drama from a show that could frequently use an injection of it.

That shit would be the shit.  It won’t happen, because it would be pretty awesome, and if there’s one thing this show does not do, it’s things that are undeniably awesome.  But if that does play out, I’d be psyched.  I just realized that I didn’t really review this episode.  Sorry.  I might actually review next week’s episode.