Finally, my time has come.  I can address this cultural monster.  My Little Pony: Friendship is Magic has become an extremely strange pop culture phenomenon.  A show obviously geared towards children, little girls in particular, has turned into a program enjoyed by people of all ages.  4chan started the ball rolling, with a few outspoken fans that began recruiting more and more grown men to their cause.  They called themselves “Bronies”.  They only grew in size, with the fandom cascading into different message boards, websites, social circles, chat rooms(I think.  The last “chat room” I visited was the msn chats from the magical 1999-2000 internet era).

My own personal encounter with the fandom came through one of my closest friends.  It was through him that I first heard about the show and subsequently heard about “bronies”.  Of course this was hilarious to me, so I immediately adopted the term and applied it to myself.  I became a Brony.  Ironically, of course.  A grown man wouldn’t actually enjoy it, I thought.  Yet, the more I interacted with my friend, the more he would mention the show.  In fact he would mention specific things happening within the show that led me to believe that yes, he actually watched it.  This is also a friend that I look up to in many ways.  One by one, other friends in that social circle started to become a Brony for real.  I consider myself open minded, so I figured, “why not?” and started to watch it when it became available on Netflix instant.  Vibrant artwork, not at all unpleasant to look at were my first thoughts.  Simple corny stories, some decent music, and after some time spent watching it, even some laughs.   Yes, after some time spent with the show it started to dawn on me, “I like this!”.  I don’t know what drew me in.  Maybe it’s the overall pleasant nature of it, it’s in such stark contrast to everything else I watch.  Game of Thrones, you like a character?  They’ll probably die soon.  The Walking Dead, you like a character?  They’ll probably die soon.  Sons of Anarchy, you like a character?  They’ll probably kill an innocent child and inject heroin into a recovering junkie.  I think you get the picture.  Everything I watch is so dark, even though I love them, it’s nice to have an escape.  So I proudly started to call myself a Brony, non-ironically.  I started having Google+ Hangouts with my friends wherein we’d watch new episodes on youtube.  I even went as far as to tell my co-workers about my new found quirk.  Basically, I took something that I might have enjoyed slightly, and way overcompensated because I didn’t expect to like it. 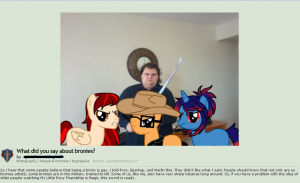 An activity book for kids based on a show for kids?  Preposterous!

My Little Pony pornography started rising in popularity, in about the same fashion that my metaphorical boner for the show wilted.  I mean WTF, this isn’t what drew me to this show.  Sexually, I’ll admit that I’m into some weird shit, but a million pictures of cartoon pony pussies honestly did nothing for me.  So I shunned My Little Pony: Friendship is Magic for a while.  I lived in as much denial as I could about my Brony days, similar to a former prostitute trying to make a new life for themselves.  I took the time to raise my son, and eventually he started to get into television.  As opposed to when he was just a little immobile thing I could set on the ground while I watched Die Hard, now he started needing specific things to hold his interest.  We watched almost everything for children on Netflix.  Mickey House Clubhouse, Thomas the Train, Daniel Tiger, Sesame Street, all of it.  One day, just recently, after being frustrated of being forced to sit through Daniel Tiger for the 5th time I decided I’d put on My Little Pony.  The colors and songs that drew me into the show also captivated my son.  Forget gender expectations, he’s 2 years old and likes what he likes.  I also realized, I never hated this show.  I hated what the fans had done to it.  I may have gone far overboard initially in my enthusiasm, but I also may have went to far in my distaste for it as it’s still a quality program for a kids’ show.  I don’t know if I’d consider myself a Brony now, maybe a Brony Light.  It’s definitely a guilty pleasure that I wouldn’t watch without a child.  Anyhow this is my connection to this show, it’s my turn to choose, and I’m excited to see Joe and Rob become 20% cooler.

My Little Pony: Friendship is Magic. It’s a show for children. I’d say it’s specifically for children ages four to six, but my daughter isn’t two yet, and she enjoyed it well enough to repeatedly ask for an encore. I suppose boys could enjoy it as well as girls, but it’s a tough age to have your developing manhood questioned, so if I had a son and he came to me and said, “dad, I don’t want to watch the ponies anymore”, I’d be cool with that. But hey, my future son wants to watch the ponies, I won’t stop him.

One audience that the show is not decidedly intended for is adult men. Bronies should not exist. I can only imagine two scenarios in which grown men would watch this show without the accompaniment of children.
1. They are a part of some mutant strain of hipster, using blatantly faux-homo childish behavior to form a quasi-elitist anti-cult of the post-bullied. High school (junior high?) was soooooooooooo unbearable that the only possible reaction is to ironically watch an animated children’s show in order to throw it back in the face of ultra-masculine tormentors. Nope, going out into the world and being successful while a majority of the ex-jocks never make it out of the hometown, stuck forever slamming pitchers of cheap beer at Wednesday bowling league and reliving the same athletic successes and failures of their youth isn’t good enough. Instead, the über-oppressed have to put together some kind of satirically strange sect of the socially subdued who are perpetually out to prove that being a man means nothing, or at least doesn’t mean what society says it does. It’s okay guys, we’re not in high school anymore. You can go play D&D and eat your boogers and I swear, no one is going to kick your ass and take your lunch money. You don’t have to be a practicing phony-pony pedophile to prove that the worth of “manliness” is exaggerated. The enlightened among us already understand, and the neanderthals that remain aren’t worth converting.

2. Unless…you really are a bunch of thinly veiled pederasts. You’re a bunch of dudes watching a show designed for little girls. You can see how we’d mistake you for kiddy-porn watching, windowless rape van-driving, candy-offering minor-fuckers, right? From what I’ve seen, a lot of you fit the profile, so you might want to avoid anything that calls attention to your unrepentant love for underage children. Sick fucks.

If you have a kid, watch the show. The songs aren’t bad, there’s a straightforward story that’s easy for kids to follow, and there’s some jokes thrown in for the adults every few minutes. But grown dudes watching by themselves? It’s not cute, it’s fucking creepy. We can’t be friends, we can’t even be hipster-companions.

When I first found out that I had to watch “My Little Pony: Friendship is Magic”, I immediately groaned. Then I realized what I love about the Switch Hitter: it forces you out of your comfort zone. I likely would’ve never watched this show, and now I finally get to see what all this brony crap is all about.

Well unfortunately, after watching the final episode of season one, entitled “The Best Night Ever”, I am no closer to understanding exactly how one becomes a brony. It must be similar to how someone becomes a Scientologist; something about the material causes one to develop a cultish following for it. I don’t envision this happening to me.

The episode begins with the ponies’ excitement over attending the “Galloping Gala”, a fancy royal horse party. One horse uses magic to turn an apple and mice into a horse-drawn carriage, but their cat scares the mice-turned-into-horses away. Then there is an amusing joke where the ponies wonder who will pull their carriage, which is funny considering that they are horses.

Then it cuts to the ponies in a salon preparing for the gala and this episode starts to lose me. Why do “bronies” like this show? It appears to be aimed squarely at young girls. There doesn’t seem to be adult double-entendres that are common among a lot of cartoons. It is excessively feminine and would seem to be the complete antithesis of something that “bros” would be into.

The whole point of this episode is that the ponies had a pre-conceived notion of how the party was going to be and each one of their conceptions was completely wrong. They thought they were each going to have “The Best Night Ever” but the party ends up being the worst night ever. At the end of the episode, they are eating at a donut shop, reminiscing about how awful the night was when the host of the gala comes in and lets them know that it was indeed a great party and that their presence livened up a normally-stuffy event. They end up enjoying themselves at the donut shop.

There are some interesting messages the show is sending to young girls. There are elements of “treat me like a princess” in this episode, where at least one of the characters wants to be treated like a classic princess. I’m not sure if this is par for the course for this character but she ends up having that turned on her head when she meets a Prince Charming who is even more hoity-toity than she is. This episode also seems to be saying that when you go to a party, you should act like yourself, no matter how obnoxious and out-of-place that behavior may be. And then, in summation, the episode ends with the lesson that you might as well avoid going to parties and instead you should just hang out with the friends that you already know, sending a basic message of xenophobia.

Perhaps I’m reading too much into this children’s show. Or maybe I’ve completely missed something in the brony appeal of “My Little Pony: Friendship is Magic”? I am glad that I was made to watch this though. Perhaps one day I will understand how one becomes a brony. For now, I’m just a jabroni.