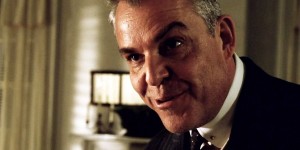 Okay so I’ve been slacking in both my TV watching and reviewing the shows I watch. I’m sure some of you can empathize and agree life sometimes kicks every square inch of your ass.
My American Horror Story is holding my captivation and going strong. In the episode (hehe Joel) “The Axeman Cometh” AHS started to finally piss me off. I don’t mean in a good or bad way. Sometimes shows do this to me, even if I like or love them . I remember screaming at my TV every week the last season of LOST and I cherish that show like a finding a rare dildo with rhinestones that sings to you on a corner market in a local city. Anyway…..

He infiltrates the Hogwarts of New Orleans and is double crossed by the witches who inhabit it and reads a tarot card and is essentially “trapped” in the house. I suppose he is a demon or ghost of some sort. that’s the great thing about American Horror Story, there are no rules. You have no idea what to expect from each episode. Maybe Ryan Murphy will throw in a rape (he likes that theme) maybe he’ll throw in some new set of supernatural laws. You never know.

Fast Forward to present day; Zoe (Taissa Farmiga) likes snooping around and finds a secret compartment full of various off things. A secret box, umbrellas, a Ouija board, the souls of perverted men and various anal beads (not really) but ya know the typical witch stuff. She contacts some evil presence (The Axeman) in the house to ask where Madison Montgomery is. (Who cares??!! I was so happy when Emma Roberts was killed. Stop trying to make “Sexy Emma Roberts happen.. she’s not sexy. She looks like a Fraggle Rock. And I support women and I think women are luscious sexy yummy delicious creatures, really I do. but Emma Roberts isn’t sexy like her Dad. She doesn’t have that Serial Rapey eyed killer look like him in Star 80)! Wow what a lot of thought for parenthesis!

Come to find out Jeeves ( Spalding) had his enchanted tongue in the box of dildos and Zoe found it. She spells that shit back in his mouth and like a magical Sodium Pentathol he starts revealing secrets. Who Is Roger Rabbit? Was Oswald the Lone gunman and who killed that gash Madison Montgomery. Ahhhhh, its Fiona. And you can see the wheels spinning for Zoe wanting to take out Fiona in some upcoming episodes. But see I get angry, I don’t care how awful and self centered and self serving Fiona is, she’s Jessica God Damn Lange. leave her be.

Cordelia is now back from the hospital trying to put the pieces together of her life after being attacked with poison in her face. And even though she is blind she can “see” things now, like a gift with purchase. Her yuppy ass husband comes into her room with her and she is highly agitated and can “see” everything he has been doing. Well at least the buggering and killing of the red headed hussy he shot in the week prior. We find out he is working for Marie Laveau (Angela Bassett) and is supposed to take out the whole Coven! Whattttt!?? I knew he was more than just a dirty dick husband! he’s a double crossing coward butthole. I do believe he loves Cordelia though I don’t think he just infiltrated the cool and didn’t fall in love with her.

I need to catch up with the current episode again folks I’m sorry this grown up shit is hard and tiring.