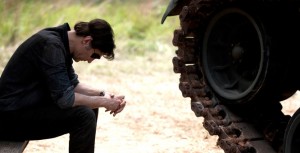 It’s a topic I’ve often pondered: how would a serial killer fare during the zombie apocalypse? Is he a mass murderer capitalizing on the lack of law enforcement, or is he just super practical?

This week’s episode missed the mark for me.  I appreciate the direction the show is moving, and am generally satisfied with the season so far.  There hasn’t been a lot to bitch about, and that’s been nice.

My first problem with this installment was that we got an attempt at a character profile from writers and a director who clearly had little experience in presenting a TV audience with an examination of an individual.  There were moments in which the audience is allowed inside the Governor’s immediate perspective, such as him standing at the end of the pier admiring his anchored-zombie-depositied-in-a-pond handiwork, or Governor scouting out the lay of the land at the prison.  There were also moments where we are clearly outside his perspective, witnessing his ending of Martinez by way of a golf club (probably 5 or 6 iron).  This shifting of perspective makes it difficult to capture and present the Governor’s motivations, which are still murky at best, preventing the audience from truly understanding the character.  When One-Eye Bri brings the ruckus to the prison, I want to know why he’s doing it.  Is it to protect his replacement family, whom he was so reticent to engage with in the first place?  Does he want revenge on Rick and Michonne?  Or is he just a megalomaniacal despot who isn’t satisfied until he is not only running shit, but murdering anyone that he can’t 100% control?  This is where the fascination lies in this character, and this episode missed a golden opportunity to explore.  Since he’s very likely to be dead relatively soon (next episode?) I’m afraid this might be the last chance we had.

The other major issue I had with this episode was that it was likely at least a partial reset button for the entire season.  We closed out season 3 with the Governor leading a Woodburian assault on Rick’s prison.  Now with season 4 episode 7, we see the Governor outside the prison, contemplating another assault.  Maybe I’m jumping to conclusions, and maybe the still-murdering, still-manipulating, still-autocratic Governor is simply going to propose a truce between the prison dwellers and his ragged camp of non-zombies.  However, regardless of the outcome of the mid-season finale next Sunday, we’ve returned to the human vs. human confrontations that we’ve seen repeatedly over past seasons, and we’re moving away from the zombie threat that had resurface over the first five episodes of this season.  But if AMC was going to have an assault on the prison in season 3, they may have wanted to come up with a different idea for S4E8 than “assault on the prison”.

Not all is lost, as the episode had several stand-out cinematic shots that were gorgeous, which has been something that the series has missed out on.  One of the great advantages of the zombie apocalypse will be the serene beauty that will return to the Earth following the cessation of mankind’s destructive tendencies (cue Al Gore’s Inconvenient Truth!).  It’s been a missed opportunity, because showing the zombification of humanity against the backdrop of beauty resulting from the end of civilization would be the great irony of the cataclysm.  But in this episode we get fantastic shots of the Georgia sunrise, and the aforementioned shot of the Governor standing at the end of the lone pier above a pond that is the definition of serenity.  Even the scene with Martinez and Mr. Governor hitting golf balls off the top of the RV showed the purity of the surrounding landscape versus the horror of the zombie pits.

It was also nice to see the Governor return to his murdering roots, but I would have preferred that his chess game be mapped out completely, with every piece falling exactly how he had planned.  I want my Governor to be so obviously smarter than everyone else around him, and more sadistic, and more manipulative, that his cult of personality is impossible to ignore and dominates the screen at all moments.  We got glimpses of that, but since he’s likely dying around 9:50 EST next Sunday, we’ll never be getting the Governor on full blast.  Unless they let him escape again.  I don’t think will, will they?  Unless they just have him kidnap Michonne or something.  Then we get 8 more episodes of David Morrissey, which could be great, but more than likely will be lukewarm at best.

I’m at least looking forward to the end of this two episode detour, which hasn’t derailed the season completely but did limit the momentum that had been building.  Hey AMC, don’t fuck up next week!