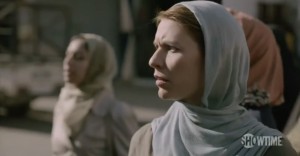 So, Homeland has actively begun to anger me.

Yes, this week’s episode was a nice follow up to last week’s episode for the percentage of the audience that enjoys Bruckheimer films, American cheese, and the smell of a locker room.  There’s something to be said for each of those things, I suppose, who am I to judge?  But none of those things was what made Homeland appointment TV for the first season and upper echelon viewing for the second.  I think those of us who have been watching from the beginning have largely moved on at this point.  We know it’s not coming back, so it’s probably best to not have any expectations, other than “it has to be better than Dexter Season 7, right?”  So here’s the question I’ve been asking myself; where did it go wrong?

I’d say that there’s one definitive answer.  From the outset of the show, everything was ancillary to Claire Danes and her quest.  The show was Carrie’s vehicle, and we were along for an intense and (literally) insane ride.  The peak moment for me was during season 1, when Estes, Saul, everyone knows that Carrie is batshit.  Carrie knows Carrie is batshit.  But through all of her bi-polar haze, and likely because of it, Carrie cracked the Brody enigma.  Even though she was nuts, Carrie the CIA superagent put the pieces together on a beautiful color-coded wall mural in her living room, and identified poster boy Brody as a sleeper double agent, when everyone else was giving him the Tom Brady treatment.

The showis  unique in its treatment of the spy thriller genre, both having it set in the present and not being afraid to tackle the American/Muslim war on terror subject matter that has gone largely ignored by major media, with the notable exception of 24 (even 24 handled the Muslim terrorist question with kid gloves, always being extremely careful to make sure that it was obvious to the viewer that “they’re not all terrorists”.  Even Zero Dark Thirty was relatively low risk, because everyone knows there’s a dead Osama payoff at the end.

But even more unique was the fact that the troubled but successful lead character was female.  Tony Soprano, has a dick.  Walter White, has a dick.  Don Draper, has a dick.  Jack Bauer, Jimmy McNaulty, Vic/Shane/Lem/Ronnie, dicks, dicks, dicks.  Carrie Matheson in my opinion is very close to being one-of-a-kind, in that she was a high profile lead character on a prestigious drama that in the history of television is almost 100% reserved for dudes.  And the fact that she was a woman wasn’t of central importance to the plot for most of the first season makes that even more impressive!  Yes, they had her fuck Brody, and that was a mistake.  They could have hinted at mutual sexual attraction and achieved the same, if not greater effect.  But goddamn, Carrie was a woman, she was leading a high concept dramatic TV show, and the story was red hot!

And what happened this season?  First, they impregnated Carrie.  Pregnancy is wonderful!  And yet, Carrie’s pregnancy has only been shown as either a hindrance to her operation, or evidence that women are too fragile to exist in the high pressure world of the CIA.  So they took a powerful female character and cut her off at the knees by planting Brody’s seed in her womb.  Nice job, Showtime, botched this one almost as bad as Harrison Morgan.

Second, Carrie really hasn’t done anything this entire season, except provide moral support to Brody.  It’s Saul’s operation, and Quinn could have filled in for Carrie in everything else she did, other than facilitating Javadi’s arrival in the US.  The show was fantastic when Carrie was on her own against the world, and it isn’t difficult to figure out why it sucks, when she’s been relegated to being Brody’s knocked up emotional crutch.  Sure, the best episodes of the season were the Brody-centric ones, but that’s because THEY DIDN’T GIVE CLAIRE FUCKING DANES ANYTHING TO DO.

So Brody killed his target, after theoretically toying with the idea of actually enjoying asylum in Iran.  He’s trapped in Iran’s Intelligence Director’s office with the body at his feet, and he needs Carrie to get him out.  Javadi aint’ helping, because he thinks Brody is ratting him out.  And somehow, Brody got ANOTHER GUY to spend time alone with him in an office.  The whole “leave us” routine just needs to be eliminated from all forms of media immediately.  You have guards so the ex-marine turned converted Muslim terrorist turned CIA asset doesn’t kill you with a conveniently placed waterford crystal and then hold a throw pillow over your face for 120 excruciating seconds!  Is this Austin Fucking Powers?!?

I can’t really take this shit any more.  Brody should die saving Carrie, and then Carrie should disappear for at least a full season, then come back part way through season 5 in some super secret blackest ops role.  This season, the twists are telegraphed, and the turns are for the sake of having turns.  There’s no masterplan, there’s no grand design.  Brody is back for viewers, the show is on because it’s popular.  I feel more than a little betrayed.