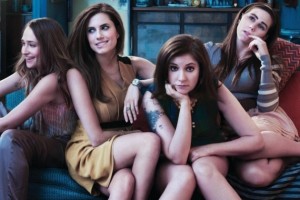 HBO’s Girls has been a bit of an enigma for me.  I’ve seen the marks of high praise given to it by critics, I’ve seen the awards given to the show, and Lena Dunham has been next to inescapable over the past six months.  But with all of the praise and public appearances, I have seen conspicuously few comments relating to the actual substance of the show.  This has happened so often that I had begun to doubt whether there actually was any substance to the show.  TV critics are notorious for starting an avalanche of praise for shows that haven’t earned it, the Emmys get it wrong as often as they get it right, and if the quality of a show was measured by the number of public appearances it’s stars made, the Kardashians would be moving to Westeros.  The picture I have in my head is sex, probably drugs, probably more sex, and probably a lot of twentysomething girly language that’s impossible for a 33-year-old self-respecting male to decipher.  But how to confirm?  SOME LIKE IT WATCHED!!!

But the format for Some Like It Watched has shifted a bit this week.  I’m the Button Man, and I am genuinely curious as to what the real appeal of Girls is, if anything.  But by the luck of the draw this week, our two analysts are avid watchers of the show, and therefore can add the appreciation of experts, rather than the insight of outsiders.  So let’s get to it, and I’ll see if Girls is worth investing my fast-depleting time in.

Girls is a very polarizing show across the internet. People seem to either adore it or they loathe it. I fall somewhere in the middle. It’s somewhat funny at times and it’s pretty groan inducing a lot of the time. Winning an award was the worst thing to happen to Lena Dunham, I believe. She was already pretty full of herself, but now? Forget about it. I think Girls is her absurd take on the manic pixie dream girl story only she’s much more of a manic trashbag after a few beers girl story. Three of my major problems with this show are that:

1. People do not speak the way that Lena Dunham thinks that they do. not since Dawson’s Creek* have I seen a show with less realistic dialogue.

2. People are not naked nearly as much as Lena Dunham thinks that they are. The amount of Lena Dunham nudity on this show is borderline fucking confrontational.

3. I don’t really like any of the Girls on Girls. Adam is my favorite character. he’s awesome and I think he’s on the show for the sole purpose of men not ripping their hair out while their girlfriends watch the show. He’s basically an avatar for all men. He sits there with a sullen look on his face while Hannah and pals spew their unbelievably inane thoughts and when he speaks, it’s usually in an outburst to get them to shut the fuck up. In short, he’s any guy who just wants to cum and is barely holding it together until he gets to.

In this episode, we celebrate Hannah’s 25th(ha, I thought she was like 35) birthday as Marnie has thrown together a nice little bash at a club with all her friends and family. It also marks the arrival of Adam’s estranged and batshit crazy sister Caroline and her gargantuan jungle bush. And the episode was heavy on Ray, and I’m fine with that because Ray rules. Although he gets beat up by a little hipster gaylord because he made the DJ stop playing his Smashing Pumpkins jam, which was actually foreshadowed somewhat earlier in the episode when fucking Colin Quinn was hanging out and chatting with Ray at the coffee shop wearing a Mellon Collie tour T-shirt. What in the blue fuck is hipster Colin Quinn doing on Girls? It’s weird. Knock it off.

Hannah sure acts like a dumbass 25 year old, though. For someone who talks so fucking much, she has no sense of social awareness and acceptability. Marnie threw her this big party and is going through major shit herself and Hannah is too self absorbed to understand how to be a friend and communicate. The least you could do was finish Marnie’s ill conceived little duet. And against all wishes from Adam, she invites nutbag Caroline into their home and I hope that’s short lived because I don’t know how much of her I can take, and then doesn’t understand why Adam isn’t in the mood for sex anymore.

But this isn’t a review. My task is to find the mass appeal of Girls. And as I said in the beginning, I’m not sure the appeal is that massive. The people that love it are fiercely protective of it, and the people who hate it seem to really fucking hate it. I think the people who find it so appealing and fresh is that they believe that it’s a harsh and honest look at relationships both romantic and platonic, and I believe it’s biggest detractors feel that it’s the complete fucking opposite of that.

*Full disclosure: I watched the shit out of Dawson’s Creek

Girls is at that spot in the existence of something cool – underground – where we all kind of expect that it no longer is – but we are perhaps afraid to tip our hats, so we say things like “I don’t know, what did you think?” then retreat when we don’t sense any validation shooting back at us. Well consider this that validation.

Girls sucks. I said it. Lena Dunham is no genius tapped into the mainline of 20-something-nothingness, she is just nothing. There is no substance to this shit anymore. Not that there was before, but there had to be, right? I mean they just don’t hand out TV shows to people. I know this isn’t TV it’s HBO, but come the fuck on. Like the e-book that was never written, this show somehow went into production under the same auspices. Then again it is executive produced by Judd Apatow, who has pretty much made a career on writing the unwritten.

Do I enjoy parts of Girls? Yes. But it is just so self-indulgent that I think I might find better use for my DVR.

Like OH EM GEE look how non-selfconcious she is, she is like totally naked all the time! Life is so hard guys, I totally relate to all the mental instability. This shit is so edgy. Did that guy just pee on that girl? Holy shit it’s just like the stories people tell on the internet.

So far this season has gone nowhere, established nothing and has only reinforced the stereotypes that the first two seasons established. We get introduced to a new character, aaaaand what’s the chances she is unstable and awkward? Yup, she bit a guy and broke a glass in her hand all while laughing and screaming.

Of course, we get to see more pathetic annoying-ness out of Marnie and her lack of confidence, while superficially exuding confidence. I wonder why they made the pretty girl so pathetic, I mean who writes this? You know that girl you knew from college that you haven’t spoken to in years but for some reason she fills up like 50% of your Facebook feed with attention whoring self pity posts? You know that girl who writes on New Years Eve, “last year was the worst year of my life, I only imagine this year will be worse

love comes in all sizes – YOU have no control over me because I refuse to give you that power?” I feel like my TV is Lena Dunham’s Facebook feed in moving pictures.

Adam runs into an ex, surprise! she is cute (we get it Lena) and unloads on him and his twisted antisocial craziness. Oh did I mention she makes a scene in public? I know right someone making an awkward spectacle of themselves on Girls, no way. This shit is real, though, people, no seriously, for those of you who don’t live in New York, it’s a pretty universally known secret that every time you find yourself in Brooklyn in a public place someone is making an awkward scene. They are either yelling at an ex in a coffee house, babbling about nothing to strangers at a bar, peeing in public, riding a bike naked, or getting beat up by gay guys. Brooklyn is crazy.

I am sorry, I don’t see Girls going on much longer. It just isn’t that good. I have watched all the episodes, but I have really lost the desire to watch much more. My patience has run out.

Well I wouldn’t exactly call that a ringing endorsement for Girls.  To be perfectly honest, I’m more than a little relieved.  THERE’S TOO MUCH FUCKING TV TO WATCH AND THE LAST THING I NEED IS ANOTHER SHITTY SHOW TO KEEP ME FROM FINISHING THE SHIELD AND CATCHING UP ON MAD MEN.  Sorry, I needed that.  And sorry it had to come at your expense, Lena Dunham.