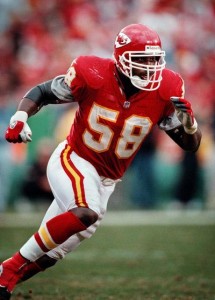 -Aw man, this guy died too early. I remember watching a primetime game once where he had like 6 sacks in one half.  This dude put fools on blast.

-Sounds like he blew right through his money as he made it.  Either on drugs, cars and women or on his community and the youngsters.  Weird.  It’s usually one or the other.

-Footage of the “Monday Night Meltdown” is shown, where Shannon Sharpe of the Broncos got into his head bad enough for him to commit penalty after penalty and cost his team the game.  Derrick was a hothead.

-And now we get to his tragic passing, where he was racing through Kansas City trying to get to St. Louis for the Rams playoff game.  There was an ice storm and 11 people got into car accidents and died that day.  Derrick’s spine was severed and he was paralyzed from the neck down..

-His car flew off the highway and flipped several times and the passenger wearing a seatbelt walked away, and another had died.

-He died at 33 of a blodclot in his leg that traveled to his lungs.

-Sorry this one ain’t too funny, guys.  DT was a great athlete and this is just sad and not much to goof on here.

-His young daughter drew a picture for him and threw it in the air on a windy day in hopes that it would fly to heaven.  What the fuck, man?  Is the Wheel of TV supposed to make me cry, because damn.

-We end on his well deserved Hall Of Fame induction

-In short, Derrick Thomas was a beast.  He was a fuckin rhino.  Built in the same mold as Lawrence Taylor, Kevin Greene, Reggie White.  He was a quarterback killer.  If you never got to see him play, it’s a shame.  But hey, that’s what Youtube is for.  To this day, I’d wager that #58 is the most plentiful jersey on display at Arrowhead Field on any given Sunday.

-What’s up next?  Something lighter, I hope.

-Oh, Ray Rice is still questionable for Sunday’s game.  Awesome.  I finally get this guy on my fantasy team and he’s been a total shitheap.

-This program is called Man to Man.  In this episode, today’s NFL QBs have chats with NFL Network “analysts” like Michael Irvin and Deion Sanders.  Lord help me.

-Firs up is Michael Irvin and Russell Wilson.  Wilson was one of last season’s great underdog stories.  As far as the rookies went, all anybody talked about was Andrew Luck vs. RGIII, and Wilson quietly turned the Seattle Seahawks from a joke to playoff contenders, taking the Falcons to the limit in the NFC divisional round last year.

-Russell Wilson looks like a little kid playing a man’s game.  He talks about how Pete Carroll has become his father figure and shown him more love than his own father did and it’s kind of touching.  Makes me see Carroll in a different light.  When all you ever see of these coaches is screaming on the sidelines and press conferences, you tend to think they’re douchebags, but he seems like a good guy here.

-Whenever I see commercials for tools, I feel such shame.  I am so NOT a man in that regard. I couldn’t build a 2×4 if you handed me a 2×4.  In a family full of construction workers, I feel like a big lameass.  Creating things from parts handed to me has always been an Achilles heel.  I took Arts and Crafts my senior year of high school and needed a passing grade to graduate.  Luckily, my teacher was a stoner drunk who liked me and gave me like a D so that I could graduate.  My actual grade in that class: 18%.  18%!!  That’s like an F – - – -

-Wilson has huge hands.  You know what that means, ladies.  It helps him throw the football real well.  Don’t be gross.

-At the end of his career, he hopes to be as beloved in the city as Ken Griffey Jr.  You hear that, Cam?  He’s coming for your love!

-Next up, Andrew Luck and Marshall Faulk.  At least that makes sense as Faulk is a former Colt that played with Luck’s predecessor, Peyton Manning. 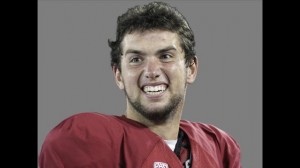 -Luck talks about Jim Harbaugh as his coach at Stanford and how awesome it was to go back to the bay area and beat the Harbaugh led 49ers. “I guess he shouldn’t have taught me so much”

-Faulk ribs him for still having a flip phone.  Who gives a shit?  what’s wrong with a RAZR?

–Welp, that’s about enough of that shit.  I return you to your regularly scheduled programming, already joined in progress.